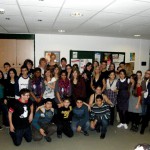 We arrived to Törökbálint on Sunday afternoon. That day was about meeting the host families and we had free time with them. After that, on Monday at 8 a.m. there were organised some so called „Ice breakers”. It meant that all of us, Hungarian, Turkish, Spanish and Romanian (because the English haven’t arrived yet) played some funny games.

While playing those games we got to know each other. We loved it. And then… Santa came! There was „Santa Claus” who brought us some sweets and the most important, the Christmas Spirit.

After that, the English arrived at about 11:45 a.m. Then we had lunch at school. From 2 to 4 p.m. we went sightseeing in Törökbálint. That was great. Even if it was not such a big town, it had interesting and beautiful places.

Then, we had to present our school in a few words and to show our collegues the „prepared shows”. It meant that every country had to prepare a little performance – sing, dance, drama… Then, from 6 p.m. we had some free time.

And finally we went to Mammuth where we bowled. For us, Romanians that was the first time when we played and we enjoyed it a lot. We got to each other in just a single day and we made new friends. Even if we knew eachother just for a day, we felt like we had known eachother for years.

Tuesday morning at 8 o’clock the whole group met at school, like every morning of that week. At 9 o’clock we went to the Visegrád Castle.

There we saw a beautiful medieval castle and we learned the story of the castle, we went to a Renaissance Restaurant to eat. It was a medieval Restaurant, where everything was magical. It was like in a story with kings and queens. We dressed up in specific clothes, we were the kings and queens.

After an “old lunch” we went to Szentendre to visit a specific museum of Hungary, and there we saw and learned how the peasants used to live, and their customs related to Christmas, like the pig slaughter and the food preparations. Because we talked about Christmas we had the opportunity to make Christmas decorations, more exactly, angels out of straw.

After the visit to Szentendre we went back to Budapest with our hosts, and we went to the ice rink, where for most of us skating was a new experience.

On Wednesday we went to school and then by bus to Budapest’s Castle District. There we received some papers with pictures and symbols. The task was to search for these statues and images and collect as much information as we could about them and then take photos for proof.  It was a very exciting challenge. Each team from each country went searching for “treasure” with the help of some maps. We won the challenge and we were very happy.

We had lunch at Trafford Aula Restaurant. The lunch was delicious, having a college like atmosphere. When we finished we had a guided tour of Budapest’s Parlament. It’s a big building with an interesting architectural design. Here is St Steven’s Crown and Crown Jewels of Hungary. We also visited a huge room where all the political discussions are held.

Then we went to the Christmas Market, which is a very colourful and musical event. We had free time to enjoy the traditional food and drink, listen to the carols and watch folk dances and street performers. We all bought souvenirs and gifts for the family back home and enjoyed some of the goodies that we found. The last activity was a trip on the Danube. It was a very beautiful trip, although a bit foggy. We had an amazing day that I wish could have last longer.

Friday was the last activity day. We started the day with a topic selection. We went to the computer lab and we learned how to use our web site. Then we had a little free time in Budapest followed by a long and exhausting shopping trip at the Central Market. After shopping we returned to school and we prepared everything for the big “challenge” of the day: cooking.

Every country had to make their specific food: the Spanish made some omelets with potatoes (tortillas), some kind of nougat and they prepared a plate with meat and cheese. The English made a spicy chicken chili stew. The Turkish made an appetizer from rice and Asian herbs, an oriental potato salad and a very sweet desert made of: coconut, honey and carrots. We prepared an eggplant salad with a plate of tomatoes and cheese.

In my opinion, the Spanish food is the best food in the world! Everything was delicious and we had a great time. The Hungarian team prepared a folk dance class, like a goodbye party then we went to a club with the hosts. It was a great day but unfortunately we also had to say goodbye and promised each other that we will keep in touch on the internet.

In October 2010, we took part in a project called Windows and Mirrors. During this project there were five different countries involved, they were England, Hungary, Spain, Turkey and Romania.

We were the first leg of the project and we went to Budapest in Hungary and it was a fabulous experience. During this visit we had a chance to take part in different activities such as a traditional Hungarian dance called Folk Dancing, making traditional foods from each country where we got to try them out.  We had a medieval themed evening where we went to a restaurant and tried the different types of food they eat. However the thing that we all enjoyed the most was spending time with our host partners and getting to know their lifestyle and adjusting to it. It was really nice to meet their family as they were really welcoming and friendly; they also gave us a good opportunity to learn their language. We went bowling and shopping with our hosts so we could get to know them well.

Going to Hungary was a lifetime experience that we all really enjoyed and we would recommend it to other students to take part in a similar project! During this project, it wasn’t all about going on holiday it was about education as we got to attend to their lessons in school and having an experience of having the differences they have and we have. However when we were leaving Hungary it was very emotional because we knew that whilst it wasn’t the last time we were going to meet our host partners, it would be a while before they came to England, to experience our way of living.

The aim of the project was to not only to experience other cultures and learn about their lives styles but also to look into their way of living through the window and reflect on ours through the mirror. This enabled us compare how people from there and us differ in terms of beliefs and lifestyles but also look at the similarities. For example while living with them we got to experience their daily routines, which mainly required waking up early around 5 o’clock to 6 o’clock and having breakfast with the rest of the family after which the parents would drop their children to school and then go work.  This is similar to what we do in England, although most of us would walk to school and would wake up around 7 o’clock. The main difference between us is the school life is they have 6 lessons which are all taken in one class and the teachers have to move around the building, whereas here we have 5 lessons for which we have to move around the school. While we were there we also did a power point presentation about teenage life and choice as well as about freedoms and introducing Leicester and its multi cultural beliefs.

All four countries were invited to come to the UK, for the Comenius Project In February 2012. This was an exciting experience as we had a full packed week full of different activities each day. During this week we had a chance to show them all around the attractions of Leicester such as; taking them to Highcross Shopping Centre, the National Space Centre.  We also went to various restaurants in the evening, but so the visitors could taste traditional English food we took them to the Red Lion at Rothley for a Carvery. We also had a chance to take them to Warwick Castle, and Stratford upon Avon to see Shakespeare’s Birthplace, we also took them to the Bullring in Birmingham to have a look at a shopping experience in the biggest shopping, we also went ice skating and bowling.

By Kamalpreet, Jenala, Jayshree and Kiran.